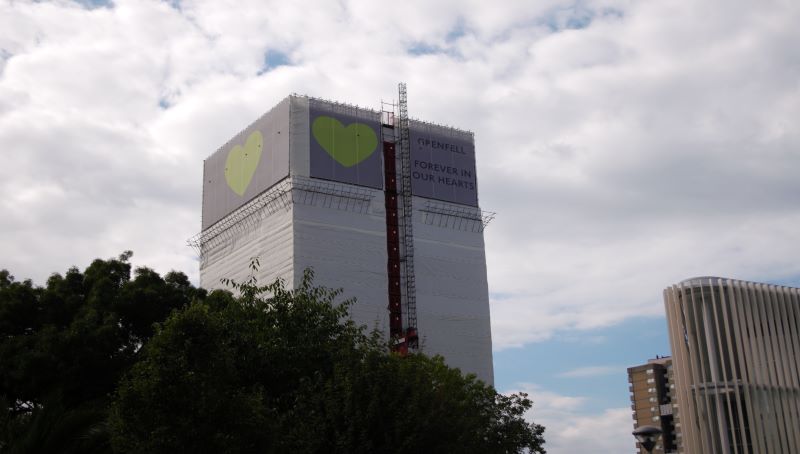 A government official said that the country would have “starved to death” if the rules were written by someone who gave “absolute priority to life safety”. (21–29 March 2022).

Brian Martin, former head of technical policy at the formally-named Ministry of Housing, Communities and Local Government, told the Grenfell Tower Public Inquiry that in his opinion policy-makers needed to “balance the costs and benefits” of imposing new rules on the building industry.

Mr Martin held responsibility for British building safety guidance for over two decades and told the inquiry into the tragedy where 72 people lost their lives on the 14 June 2017 that the country would have “starved to death” if the rules were written by a person who gave “absolute priority to life safety”.

The inquiry has been shown an email from October 2010 in which Mr Martin said that putting a prominent campaigner for residential sprinklers in charge of drafting Approved Document B (the government’s building guidance covering fire safety) would not “necessarily be in the best interests of UK Plc”.

“The nature of developing any policy, and safety policy is no different, is that you are balancing the costs and benefits of the two options. If you ignore one of those two balances, you don’t have a balanced policy. You have something which one might argue is too expensive,” Mr Martin said.

Richard Millet QC, lead counsel to the inquiry, asked Mr Martin: “Given that the provisions of [this guidance] are specifically directed to the protection of life safety, and not to the protection of industry or any other economic or commercial interest, what would be wrong with letting somebody… who had life safety as their absolute priority craft the approved document?”

“The country would be bankrupt. We’d all starve to death, I suppose, if you took it to its extreme. That’s the policy conundrum governments are faced with: you need to balance the cost of regulation with its benefits,” answered Mr Martin.

“So, death by fire or death by starvation and that’s for the government to choose between?” asked Mr Millett.

“I don’t think anybody talked about it in those terms, but that’s the principle,” Mr Martin responded.

He also accepted he “lulled” his senior government officials into “a false sense of security” about the risk of a major cladding fire in the UK – only two years before the Grenfell Tower blaze, despite a series of cladding fires in the Middle East.

It was heard at the public inquiry that he also did not issue a requested clarification confirming that the cladding later used on Grenfell Tower was banned because he “forgot”. And he also admitted to the inquiry that a recommendation to review fire standards following on from a “catastrophic” test in 2001 on the cladding panels later used on Grenfell Tower “just got missed”.

But he denies keeping quiet about the problematic building safety guidance so that he could “keep the market sweet” and he insisted that he hadn’t been covering up the “catastrophic” tests and “praying fervently” that it wouldn’t be discovered.

Mr Pargeter, director of technical, marketing and regulatory affairs for a UK division of the Irish insulation firm, was grilled about the firm’s efforts to lobby government after the fire.

Last December, he was asked about emails that would indicate the firm deliberately introduced weaknesses into a test on a non-combustible system in May 2018, in what could be perceived as an attempt to prove that these systems were also potentially dangerous. This test data was submitted to a select committee of MPs investigating the hazards of cladding systems after the Grenfell Tower fire, without the committee being informed of the deliberate flaws.

But the cladding firm has since written to the government to claim that these questions were put in error, stating that the select committee was in fact told about a different test in July 2018 that included no deliberate design faults. But it has since emerged that the test in May 2018 with the deliberate weaknesses had in fact passed, while the July test, which did fail, was carried out using a cladding panel expected to perform poorly in a fire.

Kingspan is continuing to lobby for the continued use of combustible materials on high-rise buildings in Scotland.

The inquiry also heard that the coroner for the Lakanal House fire – which occurred in 2009 – recommended that housing providers fit sprinklers in tower blocks, but that Mr Martin told his colleagues that these recommendations were “essentially pointless” and that they did not need to “kiss” the coroner’s “backside”.

Despite this, Mr Martin has accepted that the government made a “false representation” about its official guidance after the Grenfell fire but he denies that this was a “planned, deliberate and underhanded” attempt to protect its position after the deadly blaze.

Key recommendations to government from the first phrase of the Grenfell Tower Inquiry have also not been implemented.