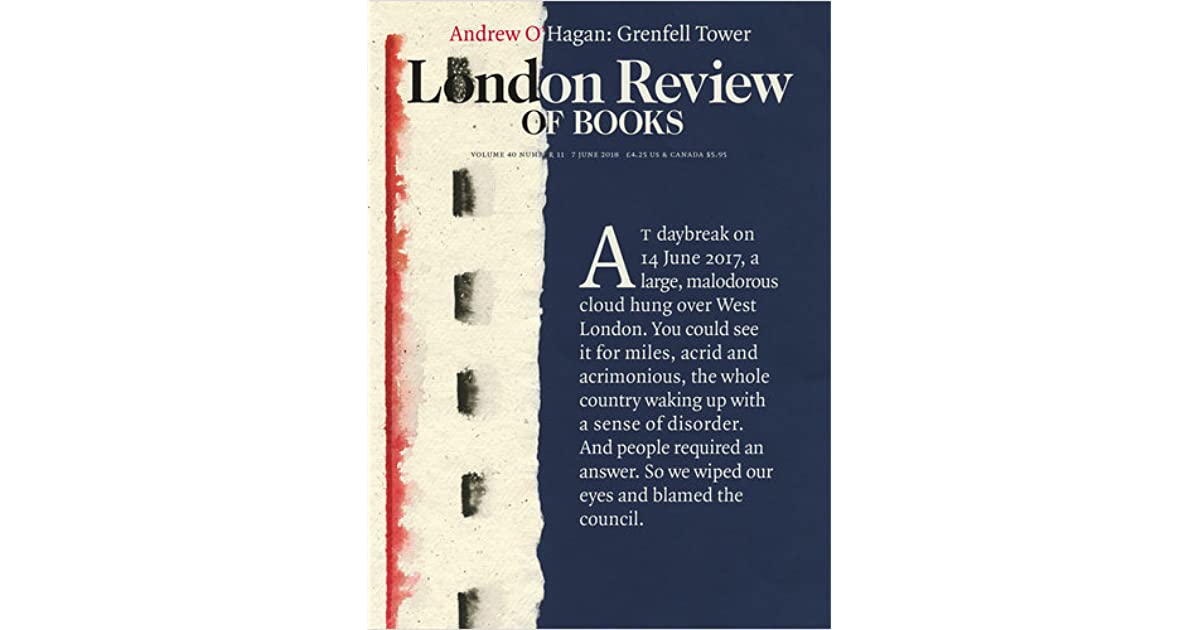 You’ll find an article about Grenfell in the London Review of Books. To tell you the truth I’d never come across this magazine. So, I did a bit of digging. The Guardian loves it.

They say that the LRB is “the most successful – and controversial – literary publication in Europe”. How does it do this? By standing against the twitter trend for sawn off half thoughts. Instead it goes for very long essays by big name authors. The point of these is to “challenge orthodoxy”. And the one on Grenfell certainly fits the bill.

The first few pages are compelling. Andrew O’Hagan is a writer make no mistake about that. And he has a pedigree. His dad lived in the tower block in Irvine that went on fire leading to big changes in safety in Scotland.

It begins with the personal stories of people in Grenfell. This brings home the human side of things. For me it was a heart wrenching read. It’s strong stuff and will stiffen the resolve to make sure this never happens again. So far, so good. Though I still think that the Reggie Yates programme where he just let people talk is stronger for being simpler. Reggie cut out the middle man. That was the right thing to do. Less is more.

Andrew tells the stories of the work done by front line Council officers at the time. He is positive about what they did. That’s good to see. By contrast he is scathing about Tory high command throwing their own people under the bus. The local Tory leaders were put to the sword to make the government look different and decisive.

Andrew thinks the local Tories failed to stand up to the media onslaught. That’s what did for them. But how do you deal with these people? I was at Manchester just after the arena bombing. Outside the town hall you had plinth after plinth of news anchors. They were competing to give the most harrowing account of the tragedy. It is a battle for airtime. But I could not hear them from the passing train. All I could see was their gyrations and gesticulations. They were like demented traders at a market. You’d do anything you could not to be on the other side of that lot. As someone once told me their job is to comfort the afflicted and afflict the comfortable. They do that well.

So, Andrew takes it upon himself to defend the local Tory leaders. That is a trademark LRB move by the looks of things. It stirs things up. By this stage in the essay you realise it is more akin to a screen play than anything else. And it will be a film one day I suppose. After Hugh Grant’s success as Jeremy Thorpe I can see him in it as councillor double barrel. But people in the know dispute the facts in the Thorpe show and they will challenge Andrew on Grenfell.

While he offers a fresh take on the local officers and leaders he also does the same to the activists. They have been seen by many as good people who warned of the problems. If only we’d listened to them this would never have happened. Andrew has no time for this. He turns it on it’s head.

Whatever the rights and wrongs of it nothing prepares you for the words he uses. He says the activists “seemed to be throwing accusations into the air like confetti at a whore’s wedding.” That is just poor.

What is interesting is that he wants us to go easy on the local Tory leaders because they should have been able to trust the experts that rubber stamped the cladding. Yet he is quick to condemn the activists for not getting everything right. If we take what he says at face value both groups are working with imperfect information. To that extent they are in a similar fix. In fairness the activists are having to find things out for themselves, so you would expect Andrew to cut them a bit of slack. And some of them will be grieving.

For me the slur on the activists spoils the whole thing. The lesson of Grenfell is that we want more questions from the folk living in our homes. If we were more open about safety and other matters, then the questioning might not be so angry. We might even nip things in the bud. And that’s the point he loses with the literary tricks.