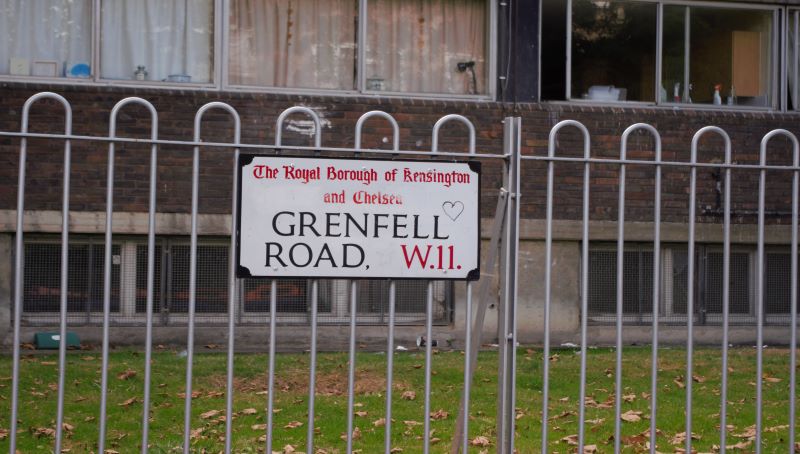 Witnesses at the Grenfell Public Inquiry heard revelations about ‘grave concerns’ over the widespread use of flammable cladding, the type that was also used on Grenfell, fifteen months before the fatal fire.

Highly-combustible polyethylene-cored aluminium composite material (ACM) was the insulation ultimately used on the Grenfell Tower, and the material that has been identified as the ‘primary cause’ of the devastating external fire spread on the night of the tragedy in 2017. Fire experts have compared its combustibility even to solid petrol and by 2016 it had been involved in a range of huge fires worldwide, particularly in the Middle East.

This week, video footage was shown at the Grenfell inquiry warning that ‘an exact repeat’ of huge cladding fires in Dubai could happen ‘in any number of buildings’ in the British capital if they were also clad with the same material.

Within the same footage, Nick Jenkins, a senior figure at cladding firm Euroclad, was shown questioning the acceptability of ACM under English building guidance ‘Approved Document B’.

The footage shown was from a conference hosted by both the Building Research Establishment (BRE) and fire barrier manufacturer Siderise in January 2016. It covered the issue of dangerous facades.

Mr Jenkins said that, when the cladding material has a polyethylene core ‘it burns very aggressively’ but that, strangely, this material still obtained a ‘Class 0’ fire rating which was the standard required by official guidance to certify it as safe to use on buildings.

He called for the product to be banned and went on to warn the attendees at the conference that ‘you could have an exact repeat of the Dubai fire in any number of buildings that we supply product to in London’.

The chair of the conference’s panel then asked if ‘we are sitting on a time bomb as well in terms of some of the materials that are installed’.

One of the panellists, Steve Evans, head of technical operations at the National House Building Council (NHBC), had just given a presentation on the ‘routes to compliance’ for combustible materials on tall buildings, which essentially is legal terminology for ensuring safety.

He was recorded answering the question about the ‘time bomb’ by stating ‘you will have to ask our builder customers’ to laughter throughout the audience.

Mr Evans was grilled at the inquiry this week about the NHBC’s questionable decision to publish guidance in July 2016 permitting the use of ACM on high-rises.

The organisation had helped draft guidance two years prior, which said that cladding systems could be signed off as compliant by fire engineers, even if they weren’t tested, through a ‘desktop study’ assessment of tests on similar systems.

Desktop studies refer to studies that are carried out purely through research, rather than physical investigations. In the construction industry, these can include product safety assessments.

Richard Millett QC, lead counsel to the Grenfell Inquiry asked Mr Evans: ‘You see by this time the use of combustible materials had been referred to variously as a ticking time bomb, [as] an accident waiting to happen, and of grave concern. Why was NHBC, who was well aware of those potential problems, now easing the passage of compliance for combustible materials rather than making things tighter?’

‘I wouldn’t consider it at that point that we’d eased the passage. We had carried out a great deal of work in satisfying ourselves and gaining information from experts in this area that we could justify issuing that note and accepting those constructions,’ responded Mr Evans.

‘NHBC don’t build buildings. We were on site for a limited amount of time. It’s the builders’ responsibility to build in accordance with the building regulations,’ Mr Evans added when he was shown a post-Grenfell spreadsheet covering numerous buildings with combustible ACM, which the NHBC had in fact signed off.

Grenfell survivors and bereaved family members told the Housing Quality Network that they found it shocking that the NHBC had signed off this guidance – that it would appear that this was an attempt to retrospectively justify buildings it had signed off with the highly flammable material.

Nabil Choucair, who lost his mother, sister, brother-in-law, and his three young nieces aged 13, 10, and three in the Grenfell fire tragedy, said: ‘I find the whole situation both sickening and disgusting.’