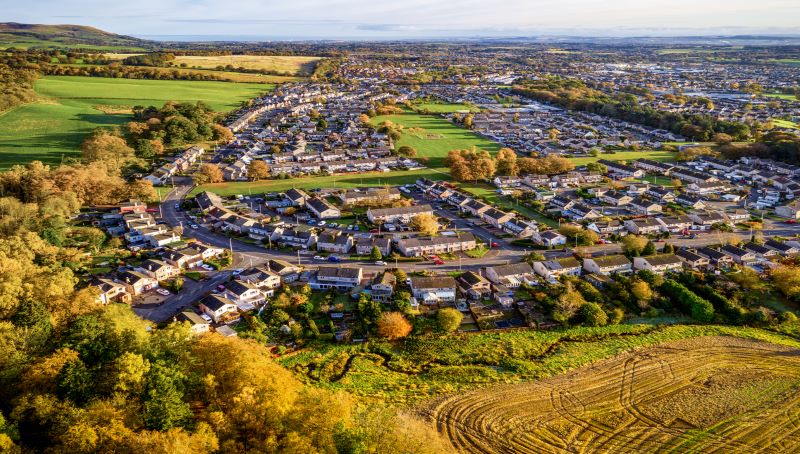 A raft of housing measures have been announced as part of the Levelling Up White Paper.

One of the main “missions” of the Levelling Up White Paper is: “By 2030, renters will have a secure path to ownership with the number of first-time buyers increasing in all areas; and the government’s ambition is for the number of non-decent rented homes to have fallen by 50%, with the biggest improvements in the lowest performing areas.”

The White Paper says that “for the first time ever” all homes in the Private Rented Sector will have to meet a minimum standard – the Decent Homes Standard. A consultation will be out in Spring 2022 to move towards legislation for this.

The document describes housing as having a “critical role in delivering the outcomes that levelling up aims to achieve across the UK” and a “necessity to support economic growth”.

It adds: “It is unacceptable that there are people living in homes that do not pass basic standards of decency and which hold back the fourishing of the children and families living in them.”

Among the changes in the paper is also a new policy on tackling empty homes. New powers are set to be introduced for councils to apply a premium of up to 100% to homes left empty for a year, rather than two years currently.

For older people “trapped in non-decent or unsuitable accommodation”, government says it will launch a new Task Force to look at ways better choice, quality and security of housing for older people can be provided, including how to address regional disparities in supply of appropriate and where necessary specialised housing.

There is also a commitment to abolish Section 21 ‘no fault’ evictions, launch a consultation on introducing a landlords register, and set out plans for a crackdown on rogue landlords – “making sure fines and bans stop repeat offenders leaving renters in terrible conditions.”

Also announced is the scrapping of the ‘80/20 rule’ which leads to 80% of government funding for housing supply being directed at ‘maximum affordability areas’.

Instead, much of the £1.8bn brownfield funding will be diverted to building on brownfield sites in the North and Midlands. The Metro Mayors will be allocated £120m of this funding, as per announcements in the previous Budget.

Home ownership will “be boosted due to a new £1.5bn Levelling Up Home Building Fund” as announced in the Budget, which will provide loans to SMEs and support the UK government’s wider regeneration agenda in areas that are a priority for levelling up.

The Government says it will “do whatever it can to achieve these missions”.

Levelling Up Secretary Michael Gove said: “The United Kingdom is an unparalleled success story. We have one of the world’s biggest and most dynamic economies. Ours is the world’s most spoken language. We have produced more Nobel Prize winners than any country other than America.

“But not everyone shares equally in the UK’s success. For decades, too many communities have been overlooked and undervalued. As some areas have flourished, others have been left in a cycle of decline. The UK has been like a jet firing on only one engine.

“Levelling Up and this White Paper is about ending this historic injustice and calling time on the postcode lottery.

“This will not be an easy task, and it won’t happen overnight, but our 12 new national levelling up missions will drive real change in towns and cities across the UK, so that where you live will no longer determine how far you can go.”

Prime Minister Boris Johnson said: “From day one, the defining mission of this government has been to level up this country, to break the link between geography and destiny so that no matter where you live you have access to the same opportunities.

“The challenges we face have been embedded over generations and cannot be dug out overnight, but this White Paper is the next crucial step.

“It is a vision for the future that will see public spending on R&D increased in every part of the country; transport connectivity improving; faster broadband in every community; life expectancies rising; violent crime falling; schools improving; and private sector investment being unleashed.

“It is the most comprehensive, ambitious plan of its kind that this country has ever seen and it will ensure that the government continues to rise to the challenge and deliver for the people of the UK.”

St Mungo’s Chief Executive Steve Douglas CBE said: “As seen through the work of the Kerslake Commission, the devolution of power enables leaders to determine and tailor the resources that are right for their own communities.

“We are also pleased that the agenda responds to a number of recommendations set out in the Kerslake report, particularly ending the use of ‘no fault’ evictions, building more homes, reducing health disparity and developing workforce skills.

“Achieving these ambitions will make a real difference to the lives of so many people who are experiencing or at risk of homelessness.

“We look forward to seeing the Government implement these missions quickly, as they offer a powerful contribution to our shared commitment to ending homelessness and rough sleeping for good.”

“The cost of living crisis weighs heavily on the shoulders of families across the capital, with four in ten children living in poverty and an unemployment rate higher than the national average. London’s role as a global city is critical to driving inclusive growth here and in the rest of the country and we can’t take it for granted.”

Ben Beadle, Chief Executive of the National Residential Landlords Association said: “Every tenant should have the right to expect properties to be safe and secure. The existing Decent Homes Standard however is not the right vehicle with which to achieve this important goal.

“At present, this standard, designed for the social rented sector, does not reflect many of the differences between it and the private rented sector. This includes the types and age of properties in each.

“We will work with the Government to ensure whatever standards expected of the sector are proportionate, fit for purpose and can be properly enforced. Without this, criminal landlords will continue to undermine the reputation of the vast majority of responsible landlords doing the right thing.”

Cllr Darren Rodwell, housing spokesperson for the Local Government Association, said: “Councils want all tenants to be able to live in safe and secure, high-quality housing and recognise the need for measures to improve living conditions in the private rented sector.

“To support a good quality local private rented offer in their communities and turn this ambition into a reality, the Government needs to ensure councils have the ability to establish landlord licensing schemes and appropriate tools and resources to support the enforcement of the quality of housing.”

Michael Voges, Executive Director of ARCO, said: “We’re delighted that the Government has listened to the calls of older people and campaigners and is making this game changing commitment to level-up housing and care for older people.  This task force has the potential to benefit hundreds of thousands of older people around the country and to put rocket-boosters on the growth of Integrated Retirement Communities.

“The task force will bring different Government departments together and needs to create the policy framework for the sector to flourish – something that will make a huge difference to the lives of older people.

“We’re looking forward to playing our part to help the task force have maximum impact.”

“For too long poor regulation has left renters at the mercy of landlords who can evict on a whim and neglect their properties with impunity.

“A national landlord register is essential for driving out criminal landlords, so this commitment is very welcome. We urge the government to bring forward legislation as soon as possible to introduce this, and make good on its three-year old commitment to abolish Section 21 evictions.”

Gillian Charlesworth, CEO of BRE, comments: “We welcome the White Paper’s intention to improve people’s wellbeing and standards of living by enhancing the quality of the UK’s housing stock.

“Local authorities will need clear support and direction if they are to deliver high quality housing within the community – but how in practice this can be achieved was missed by today’s paper.

“Many local authorities have already struggled as successive budget cuts have limited their capacity to focus on delivering the levelling up agenda.

“Another key area of opportunity missing from today’s White Paper is a clear and long-term plan for decarbonising our buildings and training the hundreds of thousands of retrofit workers needed to deliver net zero.

“Measures that support a clear and effective plan to improve the quality and sustainability of the UK’s housing stock should be at the forefront of the Government’s Levelling Up agenda – but today’s paper signals a missed opportunity to outline this.”